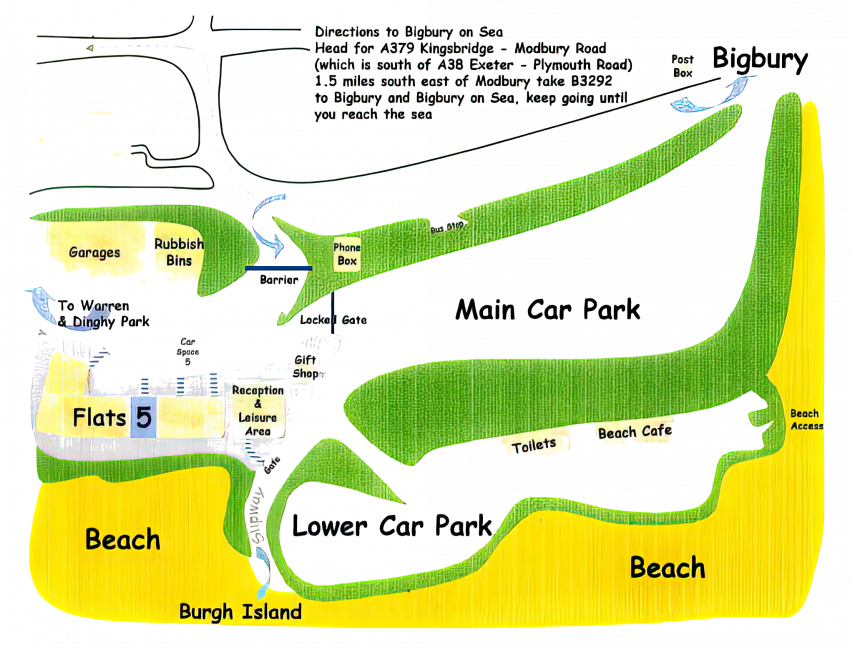 A sketch plan of the Burgh Island Causeway resort and the location of Apartment 5.

Directions to get to the resort: Head for the A379 Kingsbridge to Modbury road which is south of the A38 Exeter to Plymouth road. One and a half miles south east of Modbury take the B3292 to Bigbury and on the Bigbury-on-Sea and keep going until you reach the sea…. but stop when you do!

Burgh Island causeway is in the South Hams district on the south coast of Devon, England. It is part of the parish of Bigbury. Bigbury-on-Sea village is on the coast above the largest sandy beach in South Devon facing south to Bigbury Bay. The tidal island of Burgh Island lies about 270 yards (250 metres) offshore.

At the start of the 20th century Bigbury-on-Sea consisted of a few fishermen's cottages with fish cellars. The village grew with the growth in holidaymaking and now has a beach cafe, and by the mainland side of causeway is the Burgh Island Causeway resort built in 1998 replacing the burnt-out fishermen's cottages after a controversial planning application. The resort is made up of privately owned and holiday let flats and a private leisure club with indoor pool and gym. The Devon Coastal Path runs behind the resort.